Posted by GreenDog on Monday, 07 March 2022 in Earth Violators
Featured

World is awash in plastic; 175 nations plan a treaty to fix that 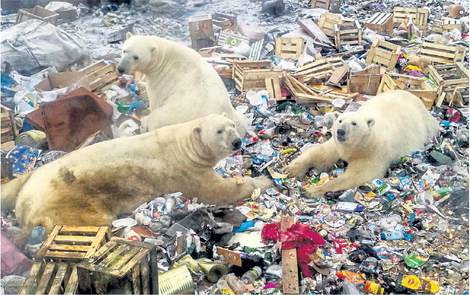 With the bang of a gavel made of recycled plastic and a standing ovation, representatives of 175 nations agreed Wednesday to begin writing a global treaty that would restrict the explosive growth of plastic pollution.

The agreement commits nations to work on a broad and legally binding treaty that would not only aim to improve recycling and clean up the world’s plastic waste but would encompass curbs on plastics production itself. That could put measures like a ban on single-use plastics, a major driver of waste, on the table.

Supporters have said that a global plastics treaty would be the most important environmental accord since the 2015 Paris Agreement on climate change, in which nations agreed to cut greenhouse gas emissions. Negotiators are now set to meet this year for the first of many rounds of talks to hammer out the details of a treaty on plastics, with a target of sealing a deal by 2024.

“We are making history today,” said Espen Barth Eide, Norway’s climate and the environment minister and president of the United Nations Environment Assembly, which took place for the past week in Nairobi, Kenya. In an earlier interview, he said that, given Russia’s war in Ukraine, it was particularly significant that “this divided world can still agree on something, based on science.”

The sheer volume of plastics the world produces is difficult to comprehend.

By one measure, the total amount ever produced is now greater than the weight of all land and marine animals combined. Only 9% has ever been recycled, the U.N. Environment Program estimates. Instead, the bulk is designed to be used just once (recycling symbols are no guarantee of recyclability) after which it ends up in landfills, dumps or the environment or is incinerated.

Scientists say plastics cause harm throughout their life cycle, releasing toxic as well as planetwarming greenhouse gases during production, landfill and incineration. Plastics, which are manufactured from fossil fuels, caused 4.5% of global greenhouse gas emissions in 2015, one recent study estimated, more than all of the world’s airplanes combined.

Wednesday’s agreement drew heavily from a joint proposal submitted by Peru and Rwanda, reflecting how, in recent years, developing nations have been at the forefront of efforts to tackle plastics pollution. Rwanda, for example, more than a decade ago adopted strict bans on the import, production, use or sale of plastic bags and packaging.

“Plastic pollution is a planetary crisis, a threat that affects all of us,” Jeanne d’Arc Mujawamariya, the Rwandan environment minister, said at the meeting. “The real work now begins.”

In much of the world, the task of collecting, sorting and recycling plastics often falls to informal waste pickers who work among fires and toxic vapors for little pay. In a landmark move, the agreement in Nairobi for the first time formally recognized the importance of waste pickers in the plastics economy.

“We waste pickers have to be involved in this process,” said Silvio Ruiz Grisales of Bogotá, Colombia, who began working at dump sites at age 12.

Now he is a leader in the Latin American and Caribbean Network of Waste Pickers, a group that advocates for better pay, working conditions and recognition.

Among other requisites, Wednesday’s agreement specifies that any global treaty must be legally binding and that it must address the full life cycle of plastics, from production to disposal, recycling and reuse. Delegates said they hoped to model the treaty on the Paris climate accord, under which countries set binding targets but are able to meet those goals using a range of policies.

The treaty also must address packaging design to cut down on plastic use, improve recycling and make technical and financial assistance available to developing nations. According to Wednesday’s agreement, it must also address microplastics, the tiny plastic debris created by the breakdown of plastics over time. Microplastics have been detected by scientists in deep ocean waters, shellfish, drinking water and even falling rain.

In the course of negotiations, some of those points faced objections from countries including the United States, Japan and India, according to three people close to the talks who were not authorized to speak publicly about negotiation details.

Japan initially submitted a competing resolution focused on marine plastics. India threatened to derail negotiations on the final day, urging that any action needed to be on a “voluntary basis,” according to a list of demands privately submitted by India’s delegation and reviewed by The New York Times.

A reference to concern over chemicals in plastic was taken out of the agreement after objections from delegations including the United States, the three people said. But in a victory for supporters of stronger policies against plastics, Wednesday’s agreement mentions the importance of considering plastic pollution’s risk to human health and the environment.

Monica P. Medina, an assistant secretary of state who headed the U.S. delegation in Nairobi, told delegates that the agreement was “the beginning of the end of the scourge of plastics on this planet.” She added, “I think we will look back on this as a day for our children and grandchildren.”