Posted by GreenDog on Tuesday, 25 October 2022 in Mining 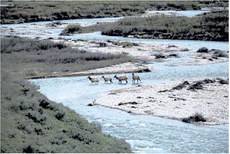 ALMA>> Colorado mountain residents got so frustrated by the gold and gravel mining churning through wetlands along headwaters of the South Platte River they took oversight into their own hands. And, after a seven-year fight that led to federal court, they recently prevailed.

They won a ruling that tilts the nation’s legal landscape in favor of controlling water pollution.

This U.S. District Court ruling in Denver last month declares miners must go through a public process and obtain permits before discharging pollutants into waste ponds near waterways. It is the first federal court case to apply a 2020 U.S. Supreme Court decision that seepage from industrial waste ponds into alluvial groundwater can be “the functional equivalent” of surface discharges directly into rivers. The federal Clean Water Act prohibits pollution without permits that specify contaminants and become increasingly restrictive.

Colorado lawmakers separately have passed a rule that requires greater efforts to prevent longterm degradation of water before a new mine can open.

These add up to toughening regulatory conditions.

But leaders in Alma and neighboring Fairplay, unlike counterparts in towns that turned into pricey resorts, remain relatively receptive to mining — as long as it doesn't destroy nature. Min-

Two-year-old Adan Santiago heads outside to ride his bike on Oct. 11in Fairplay. Adan was at his family’s mobile home in Fairplay Estates with his mother, Elsa Lopez. Adjacent to the home is a large gravel mining operation. Heaps of rock from the mining are seen from the front porch.

Mayor Saam Golgoon of Alma walks on a trail outside the small mountain town on Oct. 11.

ing serves as a counterbalance against a tourism and visitation economy that is transforming western Colorado in a way that makes housing unaffordable. And leaders here see potential if rules are enforced and “reclamation” to restore landscapes finally gets done.

“Mining is part of our heritage, and many people would rather have mining than tourism,” Alma Mayor Saam Golgoon said.

“They argue: ‘Tourism can ruin our community,’” Golgoon said, raising concerns that outside marketers will dictate a “brand” for his town.

It is a quandary — 14,271-foot Quandary Peak rises above Alma — reflecting intensifying struggles of communities around the Rocky Mountain West to define their own future.

Mining began here in 1859 during the Colorado Gold Rush and became an economic mainstay leading to statehood.

Back then, few rules applied in a free-for-all scramble for gold.

And hulking gray heaps of mining waste have loomed here for decades across hundreds of acres in South Park, along with scars in delicate tundra on surrounding snow-frosted mountains.

Much of that damage resulted from unregulated mining before 1977, the “pre-law era” of the “Wild West,” said Ginny Brannon, director of Colorado’s Division of Reclamation, Mining and Safety, the state agency charged with regulatory oversight. Because no rules applied before 1977, Brannon said, miners responsible for a portion of that mess aren’t obligated to restore wetlands around Alma and Fairplay — and an estimated 23,000 abandoned mine sites statewide — creating a costly public challenge.

Yet Colorado officials still allow mining, even the strip mining done in this area, where shipsized dredges raked through wetlands, ripping up millions of tons of rock for industrial sifting to extract gold. Gravel miners dig deeper into pits, scouring out material for making concrete. Dozens of trucks roll out each day hauling gravel to Front Range contractors for paving cities and roads.

Laws set no limit on the number of mines. State regulators have issued permits for nine goldand-gravel mines classified as “active” here, and 45 gold mines statewide, records show, including the Newmont Corporation’s stadium-sized Cripple Creek and Victor pit mine southwest of Pikes Peak. The current rules give mine operators five years after they formally declare a mine closed to complete cleanup and replanting — a period that can be extended without penalty.

Bond money posted by companies is calculated to cover revegetation sufficient for a future industrial use — but not a return to natural conditions.

Mining industry leaders long have lamented rules they saw as too burdensome. But even in a tighter regulatory landscape some see a robust mining future in Colorado as possible with steady high gold prices (above $1,600 an ounce) and global demands for computer circuitry, jewelry and banking — combined with gravel as a secondary product to make concrete.

“Mining is required for what we like to do in the United States,” said James Murray, an owner of High Mountain Mining, which runs the Alma Placer Mine just south of town. “If it cannot be grown, it has to be mined.”

Local activists began fighting in 2014 after a mining mishap turned headwaters brown, threatening fish and invertebrates. They formed Save South Park, campaigned unsuccessfully against a local rezoning to facilitate a new mine near homes, and pressed government regulatory overseers to get more involved.

“But we couldn’t get anybody from the Environmental Protection Agency or the state to do anything about the damage,” said hotel manager Pam Stone, who coordinated opposition with microbiologist Richard Hamilton, a resident who died in 2016.

“They’re not supposed to pollute when they mine. They’re supposed to put it all back. Nobody ever puts it back,” Stone said. “They leave a big, ugly, eyesore mess.”

The activists learned that operators of the Alma Placer Mine were discharging waste into riverside settling ponds without a permit — and filed a lawsuit in federal court.

They hired Boulder-based attorney Randall Weiner as part of their team — and won. Federal Judge William Martinez ruled High Mountain Mining was discharging pollution illegally and ordered the company to pay a fine of $500,000 plus legal costs.

“Colorado and a lot of other states are now going to have to ramp up their efforts to get facilities to get permits. Those permits can become stricter and stricter, with the goal that we end up with water that is fishable and drinkable — the purpose of the Clean Water Act,” Weiner said.

“The fine this judge imposed will serve as a wake-up call to industrial operators around the country within a few hundred feet of important water bodies. Any pollution requires a discharge permit — even if it flows through groundwater to get into rivers,” he said. “Water in Colorado and around the West is getting scarce. We all cherish this precious resource. So we need to do mining in a way that allows all of us to have our needs met.”

One of the lawyers representing townspeople, Western Mining Action Project senior attorney Jeff Parsons, faulted state agencies for laxity. “Even a small operator can cause a big problem,” Parsons said, referring to Colorado’s Gold King Mine blowout in 2015 that turned the Animas River mustard-yellow and other environmental disasters. “At the Alma Placer Mine, the Division of Reclamation Mining and Safety, and the Colorado Department of Public Health and Environment, should have been engaged — and made sure those miners had a permit years ago.”

Colorado water quality inspectors currently “do not have a mechanism to identify” mining and other industrial sites where companies discharge pollutants into waste ponds along rivers, CDPHE spokeswoman Kaitlyn Beekman said. (A state document shows that, following the federal court ruling, an enforcement official warned High Mountain Mining of “potential violations” for “unauthorized discharge” of “polluted effluent” containing calcium, potassium, sodium and magnesium from ponds into headwaters unless the company applies for a permit by Nov. 4.)

Here in Alma (North America’s highest town, at 10,361 feet above sea level) and Fairplay, few residents dispute local school teacher-turned-lawyer Wendy Kerner’s assessment that the huge mining waste heaps choking waterways “uglify” an otherwise picturesque area. Kerner pointed from the balcony of her home at a mining pit, heavy machinery and waste pond recently — “so blatant, so exploitative of the environment,” she said. “We accept more and more degradation because it is happening gradually. We become used to what we see, almost complacent. And so it continues and diminishes the natural environment.”

But, meanwhile, Colorado’s broader resort tourism and mountain home construction boom is accelerating, overwhelming communities across the western half of the state. Residents increasingly cannot afford to live where they work. As town after town is transformed, residents of Alma and Fairplay also are bristling against “too many people,” traffic and commercialization.

They see what happened in Breckenridge, 17 miles north over Hoosier Pass, and other Summit County resorts. Once a mining hub, Breckenridge, with its ski slopes, now ranks among the world’s ritziest resorts for millionaires.

Mining isn’t done much anymore. Property owners recently banded together and rejected a proposed gravel mine. Historic mine remnants around Breckenridge now serve mostly as a visitor attractant with resort marketers touting rustic facades of “an authentic mining town.”

And uprooted workers — including police officers, firefighters, teachers, bus drivers — come looking for houses they might afford in Alma and Fairplay. The historic blue Fairplay-Valiton hotel recently became a dormitory for workers.

A few years ago, miners here helped create the reality-TV show “Gold Rush.” Episodes filmed around Fairplay “generated a lot of interest,” town treasurer Kim Wittbrodt said. Panning for gold in the South Platte headwaters “became a sort of bucket-list thing to do.”

Record numbers of hobbyists, including semi-professional goldseekers, pay $10 at the Town Hall for panning permits. They wade through creeks scanning for gold flakes. Permit numbers have increased from 641 in 2019 to 1,191 in 2021, town records show.

Mining for economic balance would be tolerable, he said, “as long as they do it right.”

The mining opposition group Save South Park has disbanded for now.

But newcomers increasingly seek pristine views from their property, landscapes like those where native Utes hunted before settlers drove them out. They welcomed toughening rules for mining.

Fairplay Mayor Frank Just envisions creation of a 100-acre “river park” as a central amenity, a project local leaders painstakingly have planned for 10 years. It requires reclamation of mined lands.

Just pointed to an estimated 9.7 million tons of mine waste heaped south of town that some residents reckon will never be removed.

Locals remain relatively powerless, despite the court victory, Just said. “Whatever we would wish or desire is really a moot point,” he said.

“We, as a community, for the most part, we have relegated ourselves to accepting that we are a mining community. We cannot dictate to miners to the point of saying, ‘You cannot continue.’ ” However, the best mining companies have shown restoration can be done. “They’ve turned ground that was just a mess into very nicely landscaped, groomed areas that were planted” to hide scars, he said. “We expect, as the years progress, that this will be done.”

For retired legal services company owner Bob White, the argument that better-regulated mining could help avert ruinous tourism and over-development “is a legitimate one.”

Yet White has settled on “more people over the mining industry and its trucks.”

The house he’s building on a mesa looks out on gravel piles from dredging in wetlands. He hears machinery, sees white glare from industrial light. He went to Denver to meet gravel mining executives and learned miners are planning to extract enough rock to fill a 28-ton truck every three minutes for another 40 years.

He has protested repeatedly with county officials, invoking master plan priorities. He purchased a 1,400-acre ranch, protected it under a conservation easement that prohibits mining, and sold it back to the community.

Compared with mining, “I don’t see a downside to having more people,” White said.

“More people might bring a few more amenities, like a better grocery store. I don’t mind some growth. I’d take that any day, rather than having to drive between gravel trucks, hear their backing-up beepers every day and watch their dust blow across the valley.”