Posted by Wolf on Wednesday, 28 September 2011 in Earth Violators 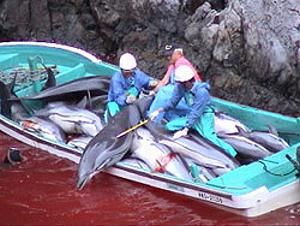 The annual dolphin hunt season in Taiji, Japan began on September 1st. We’ve told you recently aboutSave Japan Dolphins Day and Ric O’Barry in Taiji and Kelly Slater raising awareness of the dolphin slaughter. Now, reportedly the first dolphins of the season have been killed at the cove.

Typhoon Talas hit Taiji tragically killing 18 people, with many people still missing. There was hope amongst the activists present in Taiji and supporters that the hunt would at least be delayed or canceled as a result of this sad event. However, the slaughter began on September 7th. According to Suite101, “Taiji fishermen were impacted very little, despite being delayed by the adverse weather for a few days. Race car driver Leilani Münter who is in Taiji with Save Japan Dolphins and Ric O’Barry, reported yesterday that drive boats had left the harbor in Taiji and were out attempting to herd the dolphins. The net that separates the public beach from the killing cove, had also been erected, said Münter.”

Leilani wrote on her Facebook page at the time, “Very sad to report that approximately 12 Risso’s dolphins have been captured and are being killed right now in the cove.” In her blog in which she has been writing updates from Taiji, she wrote “I stood on the beach during the slaughter with the Japan Coast Guard in front of me, the police behind me, and Daniela, my fellow Cove Monitor for Save Japan Dolphins, standing next to me taking pictures and crying.  Without the ability to save them, I just sat helplessly on the rocks and posted an update of the horrible news through social media…There was comfort in knowing that the world was paying attention, and these dolphin’s lives were being recognized.  They would be remembered.  They mattered to the world.”

During the hunt, dolphins are forced into a cove with boats close behind, and killed behind the nets. Others are transported to various aquariums and kept in captivity. Save Japan Dolphins of Earth Island Institute will reportedly be remaining in Taiji to document the slaughter. Sea Shepherd has also recently said that their Cove Guardians will be returning to Taiji this season.