Posted by Calle on Saturday, 16 February 2013 in Environmental Heroes

Al Gore and the Six Drivers of Global Change 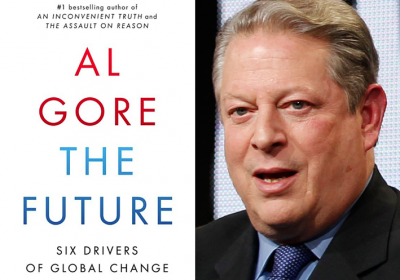 The second came when he finished his presentation, given as part of the 2013 Savannah Book Festival.

In between, the former vice president and Tennessee senator discussed his latest book, “The Future: Six Drivers of Global Change.”

Eight years ago, Gore was at a European conference when someone asked him what the drivers of global change are. He responded with what he thought was a good answer at the time.

“On the plane home, that question nagged me,” Gore said. “I got my computer out and began to write better answers.”

When the Clinton presidency began in 1993, there were only 50 sites on the World Wide Web, Gore said. “Now there are trillions of them,” he said.

Gore has written three best-selling books, including “An Inconvenient Truth,” which was turned into an Oscar-winning documentary. In 2007, he won the Nobel Peace Prize for his environmental activism.

In his presentation to a standing-room-only audience, Gore discussed each driver of global change. “Earth Inc. is a new, interconnected global economy that operates as a single entity,” he said.

Earth Inc. has led to the emergence of an integrated holistic entity with a new and different relationship to capital, labor and consumer markets. This has led to serious challenges, but also opportunity.

“We had the Great Recession of 2008,” Gore said. “Normally, after a recession when you get recovery and growth resumes, the jobs come back.

“In the last couple of recessions, it hasn’t happened that way. We have outsourcing in a completely different way.”

In addition to outsourcing of jobs to other countries, workers now face the challenge of robosourcing. “That is a brand new level of automation that is different from what we’ve seen in the past,” Gore said.

In the past, new technology meant an increase in the number of jobs. That’s no longer necessarily true, Gore said.

As an example, he described an algorithm some law firms are using that allows one first-year lawyer to complete the amount of research that once required the work of 500 first-year lawyers. “We are seeing a combination of outsourcing and robosourcing that is transforming our economy,” Gore said.

The middle class has been especially hard-hit, not just in the United States, but also in Europe, Japan, China and India, and the challenges are growing, Gore said. He pointed to the decision by the Foxconn smartphone corporation to install 1 million robots as an example of robosourcing.

Another driver is the Global Mind, or the linking of billions of people through worldwide digital communications, Internet and computers. “Forty percent of people with smartphones look at them before they get out of bed,” Gore said.

But there is peril, as well as opportunity, Gore said. Log onto dictionary.com, and the site will put 315 cookies on your program or smartphone to track your progress in exploring the Internet — forever.

Hackers pose ever-increasing challenges. “We’ve got a stalker economy out there,” Gore said. “Many of our biggest technology businesses have been plundered by hackers who steal their property. It’s become a very serious problem.”

Hackers can cause physical changes that endanger power plants and other structures, Gore said. “Our country is highly vulnerable,” he said.

The balance of global political, economic and military power is changing, Gore said. “The United States has been the unquestioned leader of the world since World War II,” he said.

“Things are changing. In a few short years, China will have the most powerful economy in the world.

“That doesn’t have to continue,” Gore said. “The United States remains the only nation capable of providing leadership.”

But America must address its own problems, too, Gore said. “Our democracy has been hacked,” he said.

“Our operating system was handed to us by the founders in the Constitution. It is not working as it should.”

That is because of big money, Gore said. The only people with the ability to communicate with the masses are the ones with huge amounts of money — corporations and special interests, he said.

“We need to reclaim the integrity of our democracy,” Gore said to loud and sustained applause from the audience.

Another driver of global change is outgrowth. Gore noted it took 200,000 years for humans to reach a world population of 1 billion. That many more have been added just since the dawn of the 21st century.

Gore cited the work of economist Simon Kuznets, who in 1937 coined the term Gross Domestic Product. Even as he defined GDP, Kuznets warned it should never be used as an economic compass because it is flawed.

The U.S. has an economic model that is less equal than those of Egypt or Tunisia, Gore said. “Ninety-three percent of all economic income gains have gone to the top 1 percent,” he said.

The fifth driver is the reinvention of life and death, as revolutions in genomic, biotechnology, neuroscience and life sciences, are occurring more rapidly than ever before. “There are so many, many blessings,” Gore said. “But we need to be careful in making choices.”

New life forms are being created as a result of scientific discoveries. Gore cited the example of the spider goat.

Spiderwebs in bulk are extremely valuable for their strength, yet are costly to produce. “You can’t farm spiders,” Gore said.

But through genetic engineering, scientists have been able to splice spider and goat genes to produce goats that then lactate and produce spider silk through their udders in their milk.

“We’re in charge of evolution,” Gore said. “China has announced it wants to be the world genetic superpower.”

The final driver is the climate crisis. “All six drivers are happening simultaneously,” Gore said.

“We as human beings, and particularly as citizens of the United States, have a lot of work to do. We need to free ourselves of outdated ideas that are holding us back.”

In addition to discussing his book, Gore offered some praise. Savannah is “one of the most beautiful cities in the entire world,” he said. “Congratulations to the Savannah Book Festival, which year after year, keeps getting bigger and better.”

Earlier in the day, Hoda Kotb, the co-host of the fourth hour of “Today” with Kathie Lee Gifford, discussed her book, “Ten Years Later: Six People Who Faced Adversity and Transformed Their Lives.”

The festival concludes today with the closing address by author David Baldacci. That event is sold out.

Go to savannahnow.com/bookfest for all our 2013 Savannah Book Festival coverage, including interviews with Al Gore, Dave Barry, Gregg Allman and Jeff Kinney.