Posted by plantitfilm on Monday, 26 August 2013 in Food

Mercury levels in Pacific fish may double by 2050 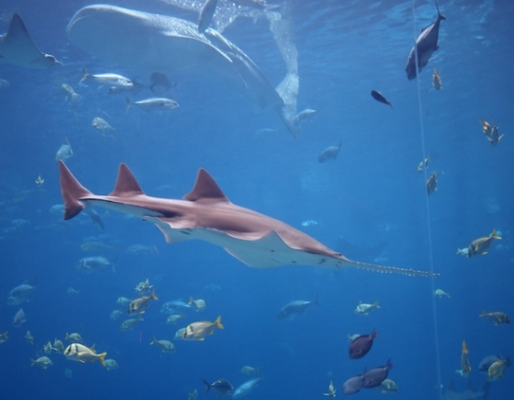 University of Michigan and University of Hawaii researchers claim to have solved a long-standing scientific mystery: how does mercury get into open-water fish? The researchers maintain they have an answer, and that their research indicates that mercury levels in Pacific fish will rise in the coming years.

The researchers utilized isotopic measuring technology developed at the University of Michigan to analyze the origins of the mercury in open-ocean fish, and they discovered that up to 80 percent of the toxic form of mercury, called methylmercury, originates in the deep ocean. Methylmercury is generated deep in the ocean, most likely by bacteria attached to sinking pieces of organic matter.

Mercury found in Pacific fish near Hawaii likely traveled thousands of miles through the air before being deposited in the ocean, the team adds, blaming industrial nations such as China and India that rely on coal-burning power plants.

The main route for human exposure to mercury in fish is through the consumption of large fish, like swordfish and king mackerel. Even fish like tuna can be exposed– in fact, almost all fish have trace amounts of mercury in them. The FDA notes that large fish have the highest levels of methylmercury because they have had more time to accumulate it since they are longer-lived.

For most people the level of mercury in fish is not a big concern, but there are some groups of people that should carefully monitor the amount of fish they are eating, like pregnant women. Eating fish with higher levels of mercury while pregnant can impact the development of a child’s nervous system. For the same reason, the FDA recommends that young children watch how much and what type of fish they consume.

Through bioaccumulation, mercury builds up in larger fish both through a longer exposure time and through their consumption of other fish that have mercury in their systems. In this latest study, scientists determined that the depth a fish feeds at plays a significant role in their exposure to mercury. Methylation continues to a depth of 2,000 feet due to the bacteria attached to sinking organic material.

This finding is significant due to two predictions about climate change’s influence on Earth: mercury levels in intermediate depths will continue to rise, and oxygen-depleted zones are also expanding. Should these two trends unfold as expected, the team predicts that the conditions in the ocean will favor increased production of mercury, greatly impacting Pacific fish, the world’s most important source of seafood.

One estimate, for example, calls for a doubling of mercury levels at intermediate depths by 2050.

“The implication is that predictions for increased mercury in deeper water will result in higher levels in fish,”  said lead author Joel Blum of the University of Michigan.

The research was published August 25 in the journal Nature Geoscience.