Posted by Dfrank4252 on Wednesday, 08 June 2016 in Environmental Heroes 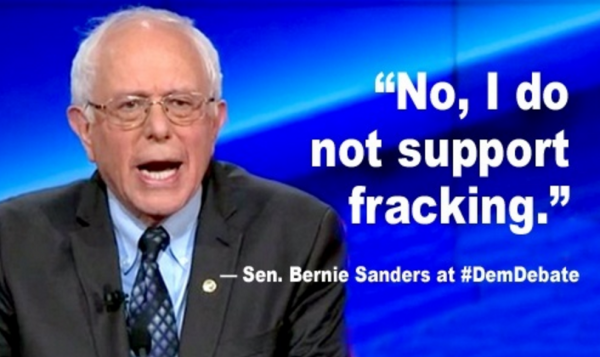 Bernie Sanders called for a nationwide ban on fracking during a news conference on Wednesday, warning that Hillary Clinton's support of the practice could be "disastrous" for California.

"It is too late for regulating, I think fracking has to be banned in America," Sanders told reporters during his stop in Spreckles, Calif. "Secretary Clinton's record when she was secretary of state on pushing fracking on foreign countries is certainly not the kind of record we want for president of the United States."

He continued, "Secretary Clinton in one way or another wants to quote unquote 'regulate' fracking. I think it is too late for regulating. I think fracking has got to be banned in America."

If elected, Sanders says he would ban fracking "in all 50 states." The Vermont senator is a co-sponsor of Senate legislation to end the extraction of all fossil fuels on public lands, including in public waters. If passed, the legislation would block the fracking reports released by the Department of the Interior last week that could clear the way for underwater ocean fracking.

So what do we do now? We make it clear to the Whitehouse and Hillary Clinton that Fracking should be banned and we want clean energy.