Posted by bensor on Saturday, 11 February 2012 in Animals 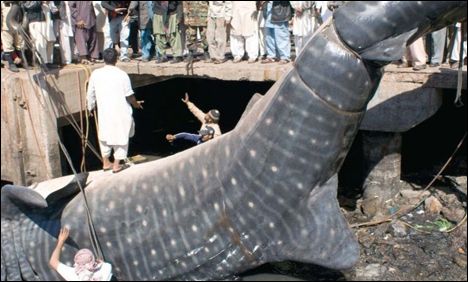 ISLAMABAD: A British scientist arrived in Karachi on Friday to examine and record the details of the 11-metre long whale shark that was towed by local fishermen to the Karachi Fish Harbour from the open sea earlier this week.

He is being accompanied by a documentary production team to tape the carcass. On Thursday, Karachi Fish Harbour Authority (KFHA) officials, after weighing the carcass at Weigh Bridge, moved it to the site of a former zoological museum inside the harbour to preserve it for research, a private news channel reported.

The KFHA officials said the exact weight of the whale shark was 14.5 tonnes. They said a four-member team of British experts from the ‘Windfall Films’ production company, along with a scientist who specializes in whale sharks, arrive today to conduct the dissection of the dead marine mammal and ascertain the cause of its death.

Producers from Windfall Films, which is known for producing documentaries and films on science fiction, contacted the KFHA officials and had expressed interest in documenting their investigation into the cause of death of the whale shark. Fisheries authorities said some experts from Marine Fisheries Department and the Centre of Excellence in Marine Biology, University of Karachi, also visited the Fish Harbour, and collected samples of the whale shark.