Posted by Debs Bru on Tuesday, 06 May 2014 in Transportation

Bicycles Can Change the World 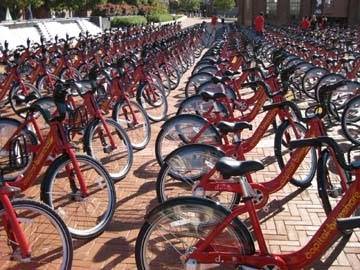 Need proof for why bicycles are a good way to change the world? Here are some good ones.

It doesn't take a scientist to work out that switching from four wheels to two wheels is a good thing. First there’s the environmental reason. For example, if 5 percent of people in New York commuting by car (either private or taxi) were to bike to work, they could save 150 million pounds of CO2 emissions per year. That’s the equivalent to the amount of CO2 reduced by planting a forest 1.3 times the size of Manhattan. And that’s only with a 5 percent change.

Then there’s the societal benefit of switching to two wheels. We would save billions of hours wasted sitting in traffic congestion. In fact, the average American spends an hour a day sitting in their car. Imagine if that hour was spent pedaling. A recent study even showed that if a bicycle was involved in a commute, people felt a whole lot happier about their commute in general.

2. They are a form of empowerment

Susan B. Anthony once said, "Let me tell you what I think of bicycling. I think it has done more to emancipate women than anything else in the world. It gives women a feeling of freedom and self-reliance. I stand and rejoice every time I see a woman ride by on a wheel....the picture of free, untrammeled womanhood."

The bicycle continues to play a significant role in women’s empowerment. World Bicycle Relief, for example, provides 50,000 bikes to students in Africa, 70 percent of them to girls. If a girl can ride to school, she can get an education. In Afghanistan, a country often cited for its poor state of women’s rights, there's a national women's cycling team, proving that women can stand up and push gender barriers no matter where they are in the world.