Posted by Jrramos on Monday, 06 October 2014 in Fishing 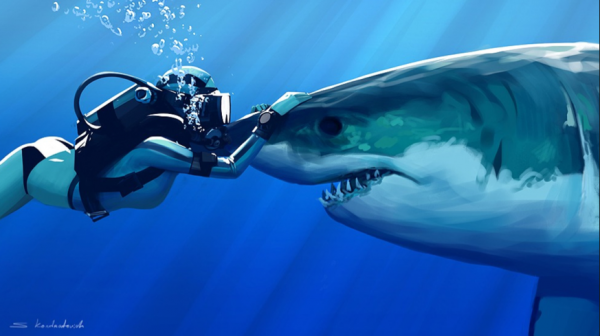 Emmy-award-winning filmmaker and marine scientist David McGuire has not only swum with sharks, he’s swum FOR them. As founder and executive director of the Sausalito-based marine research and advocacy organization Sea Stewards, McGuire started the locally popular fundraisers “Swim for the Sharks” and “Run for the Sharks”.

His newer project, Shark Stewards, focuses on the brutal practice of shark finning that’s devastating shark populations in many parts of the world – up to 70 million sharks are killed each year to make shark fin soup, according to estimates by the IUCN (International Union for the Conservation of Nature). His current work includes a film in production, Swimming For Sharks, and a book on the sharks of San Francisco Bay.

Bay Nature spoke with McGuire during the recent San Francisco Ocean Film Festival, where he hosted a program and panel on these often misunderstood  marine predators.

Are you originally from the Bay Area?  If not, what brought you here?
I grew up in Los Angeles. I graduated from UC Santa Barbara in 1984 with a BA in Marine Biology. After an expedition to the South Seas and a job at the Santa Barbara County Environmental Health Department, I moved to the Bay Area in 1990 to complete my graduate work at UC Berkeley. In 1992 I received my Masters in Environmental Health and stayed in the Bay Area after being hired as a lab manager by UC Berkeley’s Department of Integrative Biology.

Not everyone just takes off on a South Seas voyage after college. Where did you go?
I sailed on a 52-foot sloop from L.A. through French Polynesia to Tahiti and back. It was intended to be an around-the-world trip, but we cut it short for lack of a clear mission. It’s where I started photographing underwater.

What were the origins of Sea Stewards?
I founded Sea Stewards after observing finning and investigating the growth of the shark fin trade on a later sea voyage in 2001: I took leave from Cal and sailed to New Zealand,filming and documenting coral atolls and sharks. That’s where I learned about the dire threats to shark populations, particularly from shark finning. Fifteen to twenty years ago, fisherman setting longlines to catch bluefin tuna would inadvertently trap scores of sharks but then release them; now they’re killing them for their fins.

Tell us about the first film you produced about this issue.
I produced Shark Stewards of the Reef with Trillium Films to combat this crime against the ocean. It premiered at the San Francisco Ocean Film Festival in 2007 and we used it to raise awareness about  the plight of sharks in general, and in support of the successful campaign to stop the shark fin trade in California. Since then, seven other states and two US territories have implemented shark fin trade bans.

How did your newer organization, Shark Stewards, evolve out of Sea Stewards?
Sea Stewards was once part of the Ocean Foundation, where we worked on plastic pollution and other fishery policy. After the State of California passed the shark fin ban in 2011, we refocused the mission on the shark fin trade and shark finning policy and founded Shark Stewards, which is a project of the Earth Island Institute. We’re engaged in shark advocacy and activism through film and other media.

What motivated you to take up this kind of work?
I fell in love with the ocean the day I jumped into it as a boy. I was lucky enough to grow up near Topanga Beach in LA and that is where I learned to surf and where I saw my first shark. The ocean is my true love and my life’s blood, so when I saw it being degraded I quit my day job and committed myself to ocean health and protection 24/7.

You have been described as a “film conservationist”. Please describe.
I’ve always been an activist, founding clubs, staging events and working on local fisheries issues; but I’m also a photographer.  Documenting the ocean and ocean life through imagery is a passion for me, but it’s also a tool to celebrate the ocean as well as to monitor changes in it. We’ve observed diseased coral where it was once healthy; smaller and fewer fish where there were many; and the absence of sharks where there was once a healthy and intact marine ecosystem. I’ve made several documentaries [including the Emmy-award winning Reefs to Rainforests -- Eds.], contributed to others, and work as much as I can shooting for features or television to sustain my shark film advocacy work.

What is your role at the SF Ocean Film Festival?
Over the past seven years I’ve solicited films for the festival and hosted the shark film block, which features shark-related films from around the world, and is followed by a panel discussion. The shark block regularly sells out, and this year was no exception.

What was new at the festival this year?
We premiered a film called “Extinction Soup“.  This film takes a different approach to address the shark finning crisis — it’s more of a personal story and an adventure-oriented film. We intend to use this film to reach a greater audience to appreciate sharks and in turn protect sharks, fish, coral reefs, and even San Francisco Bay.

What are some of the greatest challenges you’ve faced in your work, and how have you overcome them?
Early on, we were called racists by some local Chinese American organizations because of our efforts to ban shark fin soup. That accusation is painful and untrue. Several of my board members and volunteers are Chinese and Asian-American. We were able to defuse that by galvanizing Asian Americans in support of sharks, led by the bill’s sponsor, California Assemblyman Paul Fong, himself an American citizen who was born in China.

Funding is actually the greatest challenge. The last couple years have been really tough and I haven’t paid myself. The work is great, I love it, I’m passionate about it, but I make great sacrifices for sharks and ocean health. We are trying to be creative in fundraising, like our Run for the Sharks at San Francisco’s annual Bay to Breakers race, and we do a Swim for the Sharks—four miles around Alcatraz and back with sponsored swimmers.

What are three things the Bay Area public could do to benefit sharks?
One, support the creation of Marine Protected Areas in San Francisco Bay, where large sharks reproduce and feed. We are leading that effort.

Two, avoid unsustainable seafood like swordfish, bluefin tuna, and sharks. Although shark fin soup is now illegal in California, we know it is still being served. The public can also act as watchdog and report violators. Recently a San Francisco seafood trader had over 2,000 pounds of shark fin confiscated and was cited.

Three, volunteer, take part in Run with the Sharks, sponsor a swimmer, or donate to Shark Stewards!  We are an extremely efficient and effective organization.

What is your favorite outdoor destination in the Bay Area?
Although I would rather surf, I am usually too busy to paddle out at Ocean Beach. I’m a swimmer at the Dolphin Club and swim in the Bay several times a week, often at night. I love to encounter sea lions, birds, and fish and see the city lights while I swim – especially with my Labrador Retriever.

Learn more about David’s work advocating for sharks and his films at sharkstewards.org.